Much like the Kiithid of Kharak, our journey has been long. Thirteen years have passed since we left Mothership adrift in Balcora. Rob Cunningham and company bottled lightning twice with Homeworld and its sequel, marrying a forlorn prodigal saga with revolutionary z-axial controls and impeccable production values. More than a decade on, Cunningham's independent studio Blackbird Interactive have returned to the hallowed franchise. A ground-bound prequel, Homeworld: Deserts of Kharak shows nothing has been lost in the interim.

Set prior to the events of the original Homeworld, Deserts of Kharak tells of an expedition into the planet's perilous dune seas to recover an object of speculated salvation. The scarifying clime and encroaching terrain has pushed the Kiithid of Kharak into fractious tribal alliances. Under the leadership of scientist Rachel S'jet and aboard the base carrier Kapisi, a journey begins anew. Mysteries to solve and an environment to course, against the backdrop of a larger, looming Kiithid war. As far as narrative and world-building goes, it speaks volumes that Blackbird Interactive do more with the restrictions and abstractions of an RTS than many other developers working outside the genre.

Like its forebears, Deserts of Kharak sports a finely-tuned campaign; the upswing in difficulty and complexity never overwhelms, managing to splice fresh units and tactics into missions without condescension or throttling inertia. It's an artful construction. Beyond the introduction of new systems and gear, objectives are often clever riffs on old and established ideas. An otherwise ordinary deployment of sensors is offset by the clawing threat of desert twisters, pirouetting around the basin and looking to strip armour from rovers plugging to waypoints. Destroying a trio of enemy resource camps is nothing new, but a roving and reactionary patrol detachment undermines an otherwise methodical trawl-and-terminate. The campaign is brimming with little twists that take advantage of the majestic scale and undulating terrain.

That terrain is what changes everything. The old spaceborne Homeworlds required clever mission objectives to disguise the fact that in reality, being suspended in 3D didn't offer much in the way of interesting map design. Deserts of Kharak, now very much on Terra Firma, offers rolling dunes, canyons and craggy passes, open basins and sweeping ridges to ply. Elevation offers combat bonuses, with line-of-sight equally as important. Manoeuvring in and around the natural berms and drifts makes combat incredibly engaging. The big triumph is that each sprawling level, and they are often massive tracts of land, feels unique and full of tactical possibilities. But what's most impressive is that this is still utterly Homeworld.

Movement and combat has the languid pace of the old games, with micromanagement kept to a minimum. Delegation is shared between the conventional interface and a tactical overlay with greater zoom, the latter most useful for peripheral scans and parsing surrounding topography. Controls are akin to most other RTS affairs, with the usual double-click to select all of a single unit type and right-click to move. As expected, the camera rotation, panning and zooming is effortless. My only gripe is not being able to cut deeper into the strata for low-angle ogling of large vehicles, but other than that, Deserts of Kharak is smooth sailing.

Where unit obsolescence and overlap clogs many other RTS titles - the original Homeworld games included - Deserts of Kharak feels lean. The fat-free motorpool is instead augmented by upgrades. Researching allows for greater attack proficiency, deployables like proximity scanners and turrets, plus offering the option to toggle unit-specific abilities. Base carriers also sport upgrades and can utilise salvaged technology sourced from discovered wrecks. Given the slower resource acquisition and generally smaller fleet sizes, the research tree does feel like it has some 'build merit', for lack of a better term. There is also faction differentiation between the Coalition and Gaalsien factions, which offers interesting operational wrinkles in fleet asymmetry.

Rob Cunningham said Deserts of Kharak is a 'vehicle fantasy', and nothing could be more truthful. The motorpool is absolutely outstanding in detail, design and execution. LeTourneau fever-dreams by way of General Dynamics and John Deere, the pluggers and crawlers of Deserts of Kharak evoke rugged utilitarianism with little room for fancy. Buggies rock and skid on individually-modeled shocks, hurtling off the lips of dunes in a fashion usually reserved for racing games. The Baserunner sits atop six gigantic radial tires that slough satisfyingly with every new heading. Support Carriers, Deserts of Kharak's amalgam of the Support Frigate and Resource Controller, churn through the dust on quad-housed double-treads; tiny gantries and sensor arrays stippling its superstructure like some offworld Caterpillar 797 variant. It throws a big shadow over the lighter craft, but none compared to the base carriers.

Though not initially as iconic as Kushan/Hiigaran Mothership, the Coalition and Gaalsien base carriers are marvels. Elephantine, bristling with antennae, lights, vehicle bays, flight decks and capped with a monolithic conning tower, these gargantuan crawlers are feats of visual design. Speaking primarily to the Kapisi herself, it encapsulates the scope that few games have swung for and far less succeeded in accomplishing. Consider something in the genre as under-served as sound design. I'll touch on the greater audio component in a moment, but in relation to the Kapisi, her onboard drive engines give off such a magnificent thrum when mobile. Even better, the subtle sound design of the carrier coming to a halt infers big powertrains cycling down. The engine offers a reduced whine until fully idle, and such meticulous presentation permeates the entire game. 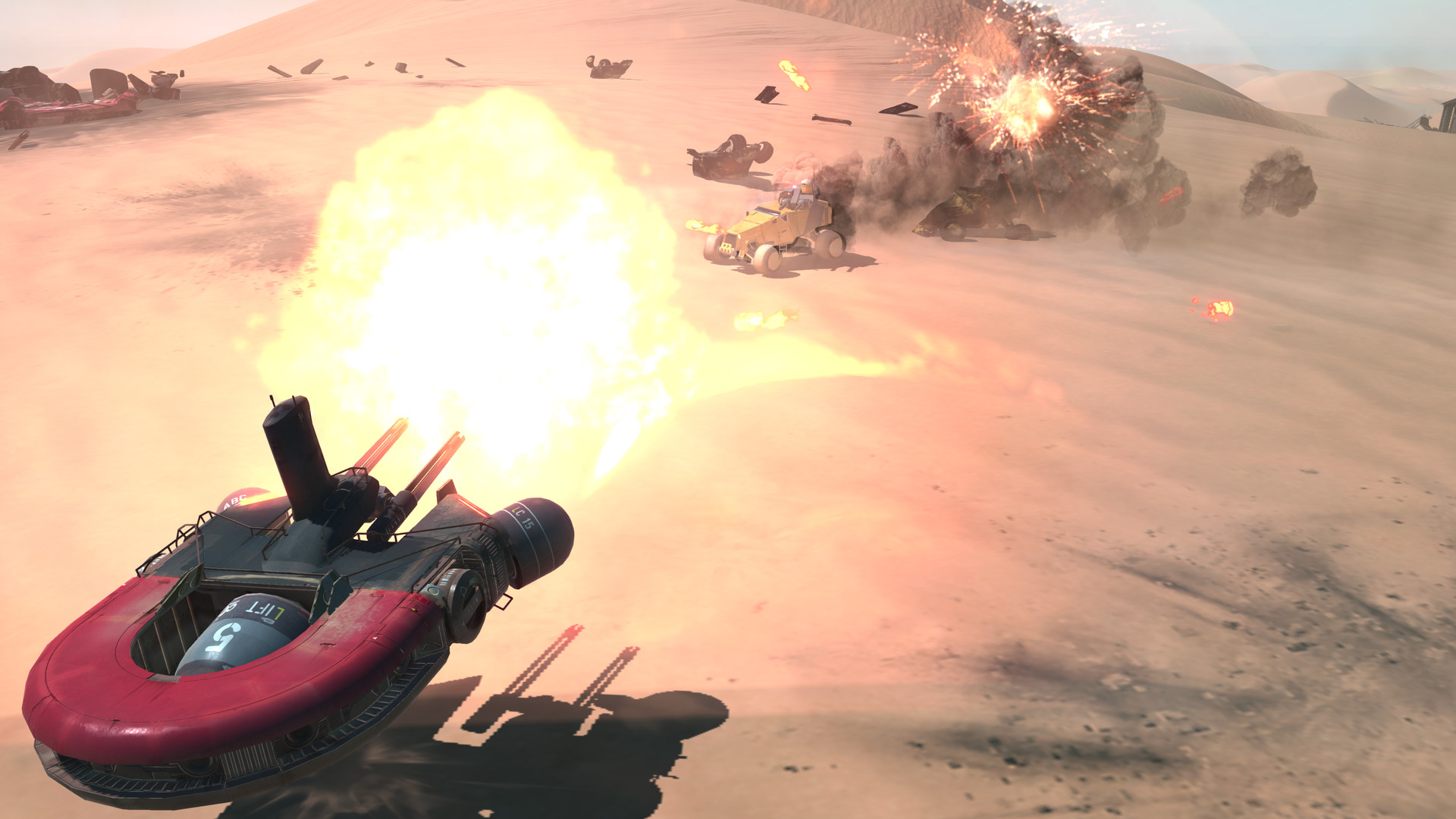 That fastidious attention to detail is what I love about Deserts of Kharak. Even during downtime, units can be heard communicating across the fleet band. Carrier control checks in with deployed troops, with a snappy back-and-forth about updated network firmware and firewalls. Phased radio squawks, barely audible through atmospheric distortion and sheer distance, pepper the channels and make operations in the deep desert feel markedly more isolated. Paul Ruskay returns with a stunning score, retaining the exotic, middle-eastern fusion we all loved from the original games. While there's no Adagio for strings to tear your heart out this time around, the soundtrack is peerless; washes of drone and tabla and esraj, tribal chanting and stirring orchestral strings.

In a world where the word 'prequel' comes laden with mistrust and disappointment, Deserts of Kharak excels in keeping the formula, but expanding effortlessly on what was already good. Without caveat, Homeworld: Deserts of Kharak is the first great game of 2016, and the best real-time strategy in years. Go for Kapisi. It's good to be home.

Without caveat, this is the first great game of 2016, and the best real-time strategy in years.